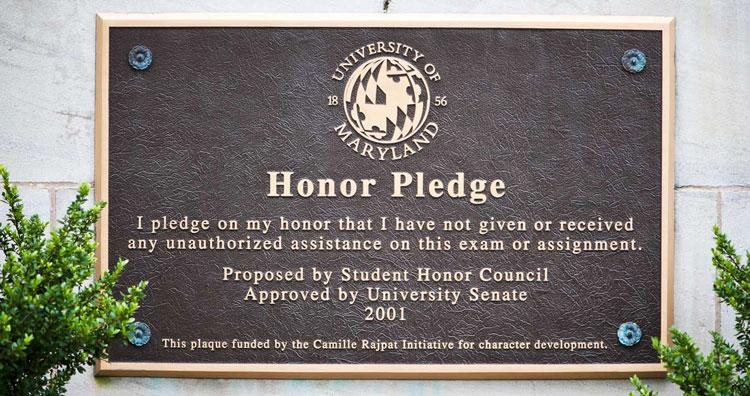 The Honor Pledge is a statement undergraduate and graduate students should be asked to write by hand and sign on examinations, papers, or other academic assignments. The Pledge reads:.

I pledge on my honor that I have not given or received any unauthorized assistance on this assignment/examination.

The pledge was adopted by the University Senate on April 9, 2001, and approved by the President on May 10, 2001. Full implementation was effective throughout the University on the first day of the Spring 2002 semester.

Each year during New Student Orientation, new students sign an Honor Scroll for their graduating class. The signing of the scroll is each student's introduction to the culture of academic integrity fostered by the University of Maryland.

What should faculty members write about the Pledge in their syllabi?

The following language may be used as a model:

I pledge on my honor that I have not given or received any unauthorized assistance on this assignment/examination.

Unless you are specifically advised to the contrary, the Pledge statement should be handwritten and signed on the front cover of all papers, projects, or other academic assignments submitted for evaluation in this course. Students who fail to write and sign the Pledge will be asked to confer with the instructor.

Other Items to include:

What is the Maryland Honor Pledge designed to accomplish?

The Honor Pledge is a community building ritual, designed to encourage faculty and students to reflect upon the University's core institutional value of academic integrity. Professors who invite students to sign the Honor Pledge signify that there is an ethical component to teaching and learning. Students who write by hand and sign the Pledge affirm a sense of pride in the integrity of their work.

No. Student leaders at Maryland would not have developed the Pledge if it had that connotation. People who enter a profession or assume public office often sign an oath or affirmation. Likewise, Maryland students endorse the Honor Pledge because they feel a growing sense of pride in the quality of the University. For them, the Pledge reflects their public statement of support for academic excellence, including the highest standards for academic integrity.

Is there any evidence pledges or public affirmations make a difference in attitudes or behavior?

Princeton graduate Don McCabe (Professor of Management at Rutgers University and founder of the International Center for Academic Integrity at Clemson University) wrote to the Committee:

I am very partial to pledges. I would suggest that a significant majority of honor code school alumni. . . can still recite the honor pledge even though it's been 30- to-50 years or more since they last signed it. It was a very meaningful part of the [honor] code tradition.

This perspective has been consistently echoed by University of Maryland faculty members who are graduates of honor code schools.

How can an honor pledge deter someone who has already decided to engage in academic dishonesty?

Honor pledges are not likely to deter the most determined cheaters. Most students, however, do not fall into that category. They cheat because they developed the habit of cheating in high school or because they think "everyone does it" in college.

One of the values of an honor pledge is regular reiteration of a campus-wide commitment to academic integrity. Writing and signing an honor pledge and seeing other students do the same sends the powerful message that academic dishonesty is not considered acceptable behavior among students, and that promoting academic integrity is a responsibility students share with faculty members.

Why are students asked to write the Pledge by hand as well as to sign it?

The purpose of asking students to write the Pledge by hand is to promote a period of serious reflection at the beginning or end of an academic exercise. Additionally by having them write the pledge and not just sign there name next to it they are actually reading and comprehending the words of the Honor Pledge. Therefore, they have more contact and exposure with the Honor Pledge.

Are honor pledges burdensome to administer?

Administration of honor pledges is not unduly burdensome, as evidenced by long-standing faculty support for honor pledges at many institutions and Maryland in particular. The wording of the Pledge (with appropriate space to write and sign) is printed on all University examination booklets and electronic grading forms.

What if a student refuses to write or sign the Pledge?

The Maryland Honor Pledge was reviewed by legal counsel and is carefully crafted to respect the autonomy of individuals who might object to a pledge requirement on religious or ideological grounds. The University Senate resolution on the Honor Pledge states that "signing or non-signing of the Pledge will not be considered in grading or judicial procedures."

If a handwritten Honor Pledge and Pledge signature do not appear on a paper or examination, faculty members should ask the student for an explanation. Doing so has the added value of encouraging teachers and students to discuss the importance of academic integrity and the best ways to promote it. Students remain free to decline to write or sign the Pledge and should not be penalized for exercising that right. Students should be reminded, however, that they are subject to the requirements of the Code of Academic Integrity, whether or not they write and sign the Honor Pledge.

How can a pledge be effective if it isn't compulsory?

The highest forms of moral development require freedom to choose, influenced by example and persuasion, not compulsion. The Honor Pledge is meant to reflect a personal commitment. It should spark thought and debate. A principled decision not to write and sign the Pledge discussed and explained in an atmosphere of mutual respect would likely do more to promote the University's core value of academic integrity than ritualistic compliance.

What kinds of academic exercises should include the Pledge statement?

The University Senate Committee on Student Conduct, with approval by the Senate Executive Committee, has urged faculty members to include the Pledge on all assignments worth 20% or more of the course grade. The Pledge may also be included on lesser assignments this is up to the discretion of each individual professor.

What should faculty members tell students about University academic integrity standards and the Honor Pledge?

Substantial research shows that academic dishonesty is less likely to occur in classes where students know their teachers care about academic integrity. Stern lectures or threats of punishment are not required. The best approach is to identify and affirm high community standards, endorsed by other students. For example, faculty members might state on the first day of classes that:

The University has an active Student Honor Council. The Honor Council sets high standards for academic integrity, and I support its efforts. Please note in this regard the University Honor Pledge you will be asked to write and sign on papers and examinations, as specified in my syllabus.